The Saddleback Caterpillar and Lepidoptera memory 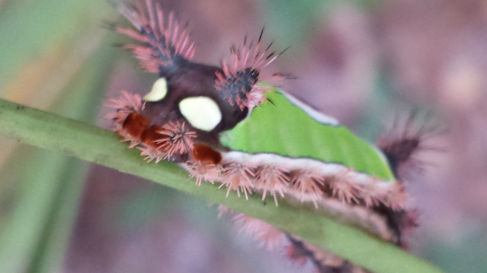 I met this fellow in O’leno State Park  (along with a bunch of awesome Orb-weavers that I’ll probably post at some point). It’s a Saddleback Caterpillar (Acharia stimulea.) You can barely notice the ‘saddle’ on its back here, but I’m sure you have no problem noticing the venomous spines (known as Urticating hair) and mock-face (a startle display) on its backside. This larvae will eventually metamorphose into a limacodid moth:

Like many of the caterpillar –> butterfly/moth transformations, the adult bears little resemblance to the larvae in both body and behavior. It’s difficult to believe that the two life stages even belong to the same organism. In fact, what does the adult share with the larvae? Once in the cocoon does the body completely melt down and reform, leading to a rebirth and a fresh life? Or, does the adult have some memory of its youth?

Well, research suggests that the adults do share memories with their earlier selves. The scientists trained caterpillars to associate a specific odor with an electrical shock and found that, after metamorphosis, the adult moth avoided the odor that was associated with the shock earlier in life.

This shocking finding (sorry, I had to) may help scientists understand how Lepidoptera select habitat and, who knows, may have implications with human memory retention as well. 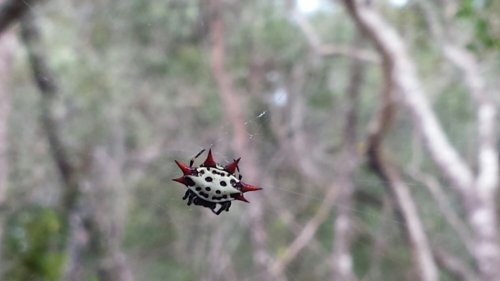 We saw some interesting wildlife while hiking through O’leno State Park yesterday.